Disclosure: This post may contain affiliate links, by which I may be financially compensated. See Disclosures for more info. 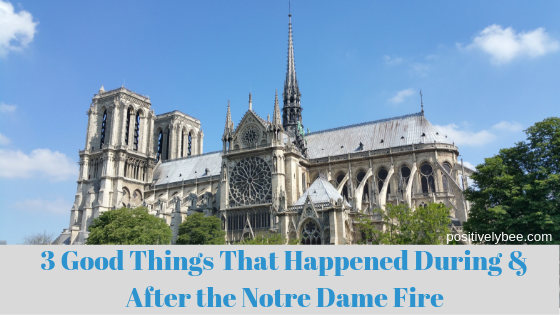 It's Good Friday, and if you’re familiar with my posting patterns, you may be expecting a fortune cookie today, but it seems more important to address something that happened earlier this week: the fire that nearly destroyed Notre Dame.

I know you must be wondering: what positive things could possibly have happened during and after a devastating fire? I'll get to that.

I took Notre Dame’s fire pretty badly. Such an iconic structure—one I’d always hoped to visit some day—up in flames just like that (*snaps fingers*), and during Holy Week, no less. Whether you're a person of faith or not, it is SUCH a part of history, of Paris—a place of beautiful art and architecture. Watching the iconic spire go crashing through the roof was just gutting!

To give a sense of the amount of time Notre Dame has been part of the Paris landscape, construction started over 800 years ago and was largely complete by about 1260. Beams were made from oak trees cut down in the 12th century. The entire wooden interior was lost, and two-thirds of the roof is gone. I found myself wondering, how old were those trees when the lumber was hewn for the construction? Was the wood in those beams a thousand years old? More?

As I watched the flames, I felt Notre Dame's, Paris', and the world's pain viscerally. I literally ached with the loss.

Maybe my feelings of loss are amplified by the fact that for the past week or so, several friends of mine and I have sat vigil for a friend dying of glioblastoma. She passed last night.

Suffice to say: everything hurts a ton right now.

But I started this blog because I wanted to find better coping techniques and shift how I think about things, to find a better way to live life more positively, and then share it with you.

To that end, I started looking for the silver lining in this event. What, if any, good news surrounds the loss of such a recognizable Paris icon?

Well, it turns out, there's enough good out there for me to hold onto. I hope the following points help you as you process the news, too.

3 Good Things That Happened During and After

the Fire at Notre Dame

There were construction workers laboring that day, involved in a restoration of the Cathedral’s roof. Having a fire start on a roof during a job is a roofer’s worst nightmare. Not only can a structure go up in flames within minutes, it’s very dangerous for the workers. But everyone got out alive. Not only that, but no firefighters or civilians were killed, either. Although one firefighter was injured, I’m grateful to hear that no other serious injuries occurred. (Prayers for that firefighter as they recover!) Credit can also be given to the giant robot, Colossus, that helped save lives by going in and spraying water where firefighters couldn't, taming the flames while firefighters had to fall back. These efforts saved lives while still allowing the bell towers to be saved. Which leads me to #2...

2. Precious art and artifacts were saved.

While the spire, beams, and stained glass were lost, other precious art was saved. Indeed, plans were already in place in case of emergency, so volunteers were able to mobilize quickly to save what could be saved from within the church. While a building can be rebuilt, what was inside was priceless and irreplaceable: the three 13th century Rose windows, the crucifix, the golden altar, the crown of thorns, the Saint-Louis tunic, and more—were saved! While some items remain unaccounted for, most of what was treasured inside was rescued as the building burned. In addition, the two iconic towers were not destroyed, either, keeping the building's structure intact. While restoration may be expensive, long, and difficult, it *can* be done.

3. The rebuilding effort is already underway at an amazing pace.

Donations are already rolling in for a restoration that could cost billions of dollars. It hasn’t even been a week, and the last figure I read said $1B has been raised so far. That’s incredible! Donations are coming from French citizens and companies, organizations in other countries, and individual donors from around the world. It’s good to hear that people are banding together in the face of the near-loss of one of France's national treasures.

While tragedy can really create a hiccup in our emotional state, leading to any number of negative side-effects, perhaps by looking for the silver linings—the helpers, the heroes, etc.—we can disrupt at least some of that negativity, ease our suffering, find zen again, and get through it together.

If you celebrate, I hope you have a wonderful Easter.  🕊

BONUS ROUND!! Right before posting this, I found out that people had an impromptu vigil singing Ave Maria as they watched Notre Dame burn, so I’ll share it here. Have you ever seen complete strangers do something like this, in harmony, no less? Very touching, indeed. Here's the video:

Disclosure: This post may contain affiliate links, by which I may be financially compensated. See  Disclosures  for more info.  It’s finally...

Following links on this site may result in my earning a fee. As an Amazon Associate I earn from qualifying purchases.